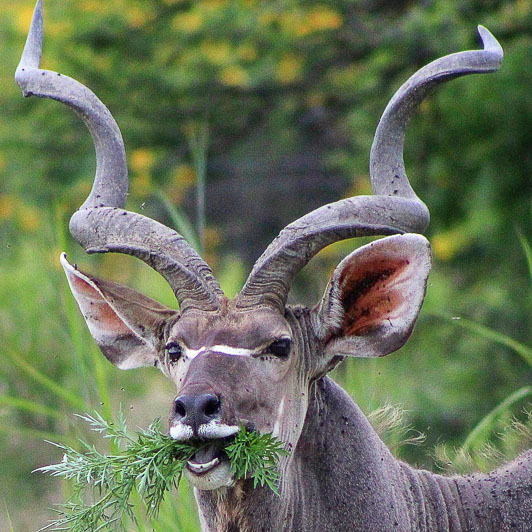 The Grey Ghost of Nambiti

18 Dec The Grey Ghost of Nambiti

Posted at 07:38h in Blog, Wildlife by Nambiti Game Reserve

The Grey Ghost of Nambiti

The greater Kudu, often referred to as the “grey ghost”, is a very alert and nervous beast. These handsome, majestic, agile antelope are able to appear and disappear from sight in the blink of an eye, despite their size. They have uniquely large radar ears with highly sensitive hearing that detect danger. This can put a serious damper on any predator’s bid for a meal, even when in stealth mode.

The ghost bulls will often travel solo or form small bachelor herds with other bulls. They join up with the females to mate. This means they need to compete with an opponent to win the approval of the ladies. They do this by locking their long twisted horns with their adversary, using their strong thick necks to unbalance them. To look as impressive as possible, they stand laterally, raising their neck and back mane to look bigger in a display of dominance. If their opponent is impressed, he will then back down.

While browsing, these ghosts find having long twisted horns very useful. The bulls will use their horns to pull down high branches to get the young juicy leaves they would not be able to reach otherwise.

These magnificent antelope are well known for their jumping abilities and are able to gracefully clear a 3 meter high fence from standing, with ease.

Whether they are just browsing, sparring or lying down and chewing the cud, Kudu are magnificent, peaceful antelope that make for a mesmerising and unforgettable sight.

But be warned, it is a case of “now you see me, now you don’t” as they quietly and easily disappear into the bush, just like a ghost.