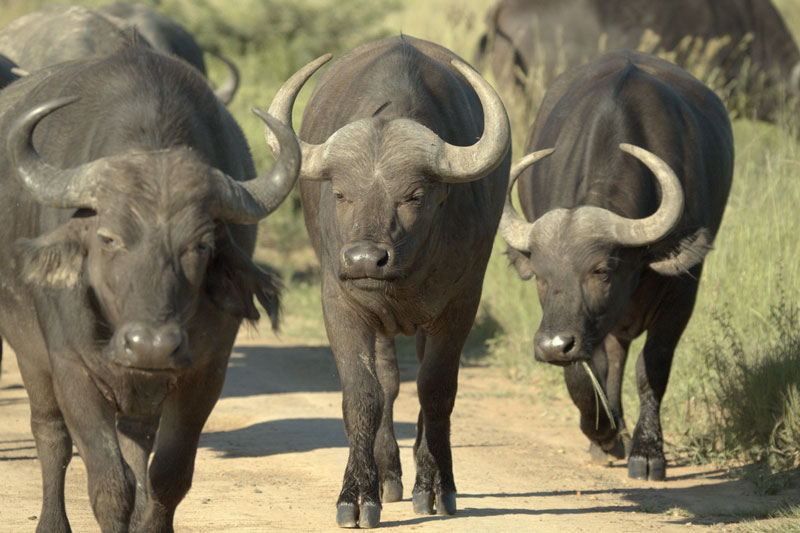 Nambiti’s New Buffalo on the Block

Exciting news at Nambiti Big 5 Private Game Reserve is that we recently introduced ten new buffalo to the reserve to help with our buffalo population’s genetic diversity.

Historically, the African Buffalo roamed most of Sub-Saharan Africa. The animals would meet up and mix and breed with other herds of buffalo, ensuring genetic diversity was introduced to the different herds. In modern times, however, things have changed due to human encroachment. Buffalo habitats have become fragmented, with buffalo being restricted to certain game reserves.

This is why we need to introduce new bloodlines into game reserves such as Nambiti, to provide some genetic diversity to our isolated buffalo herds. Before being brought to the reserve, ten buffalo were carefully screened and tested for any diseases before being given the all-clear. These healthy, disease-free buffalo were relocated to Nambiti under the supervision of our Reserve Management and a specialized Vet.

We released the new buffalo close to our current herd in the hopes that they will join up together.

As bulk grazers, buffalo have an important role to fill in the reserve ecosystem. They convert long grasslands into shorter grassy environments which are better suited to other grazers. Buffalo dung is also an extremely good fertilizer, restoring much-needed nutrients and nitrogen to the soil. This helps seeds germinate and plants grow.

Another critical role buffalo perform in the ecosystem is ‘tick management’. Buffalo are able to carry huge infestations of these parasites, which provides much-needed sustenance to the oxpeckers that are always seen hanging on to their hides. Without buffalo, tick populations can explode and have a negative impact on the other smaller animals on which they feed. Some smaller animals (like impala) can even die as a result of anemia caused by ticks feeding off them.

We’d like to invite you to Nambiti, to come and see our new inhabitants for yourself, witnessing the vital role that these animals have to play in maintaining our delicate habitat.