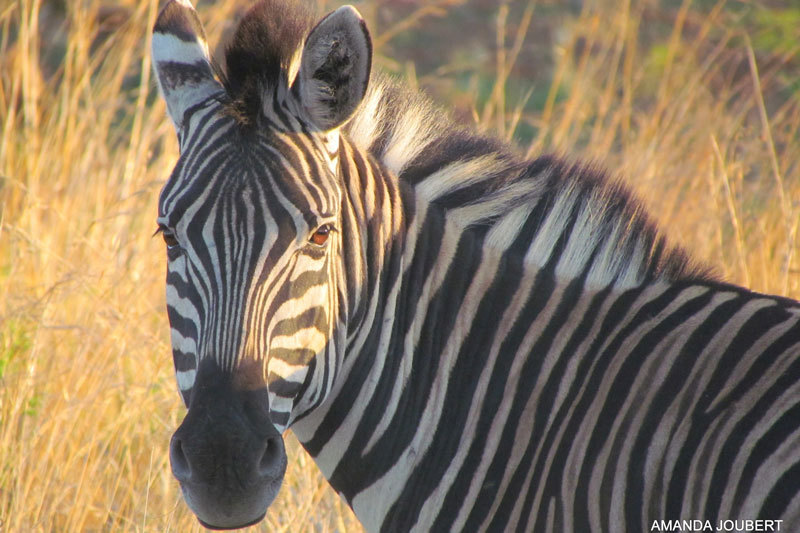 Posted at 08:40h in Wildlife by Nambiti Game Reserve

With their amazing coat patterns and bubbly, playful personalities, zebras make for a mesmerising sight. Imagine being one of the first settlers in Africa and seeing a zebra for the first time – what a surprise to see a ‘painted horse’!

Nambiti is home to the Plains zebra, the most abundant of three species of zebra. The other two species are Grevy’s zebras and Mountain zebras. On average, the Plains zebra is the smallest of the three, ranging in height from 1 – 1.5 m (3.5 – 5 ft.) and weighing up to 450 kg.

Stripes of all types

Although scientists are not entirely sure why zebras have striped, most research points to camouflage. When zebras congregate together in herds, the complex mix of patterns makes it difficult for predators to isolate a single zebra from the rest of the group. Another speculation is that the stripes help zebras identify each other.

#1 The scientific name for the Plains zebra is equus quagga burchellii:

Within 15 minutes of being born, a baby zebra is able to stand up on its own; within an hour, it is walking; and, not long after, it’s ready to run.

It is thought that mother zebras will deliberately position themselves between their newborn foals and the rest of the herd so that the foal can learn her pattern and identify her as its mother.

Unlike most antelopes, zebras are active and noisy animals which don’t make much effort to hide when predators are nearby. When a zebra spots a predator, it will often begin snorting and grunting to alert the rest of the herd. Even when confronted with the predator, a zebra may choose to fight off the attacker using its powerful backwards kick. If a zebra is attacked, other zebras circle around to help protect it.

#4 The steed of the savannah

Like all members of the horse family, zebras are ungulates. They walk on tiptoe on a single central toe, which is protected by the hoof. Zebras have four gaits – walking, trotting, cantering and galloping. At full speed, a zebra can run between 50 – 60 kilometres per hour.

Zebras live in family herds that typically consist of a dominant male (stallion), several females (mares) and their children. These family groups are called harems. Plains zebras also tend to integrate well with other grazers. They can often be seen coexisting peacefully with kudu, wildebeest and impala.

Although zebras are some of the most commonly seen mammals in the African savannas, no safari would be the same without their striking stripes, cute babies and fascinating qualities. We hope you have some new facts to share when you see zebras on your next Nambiti safari!