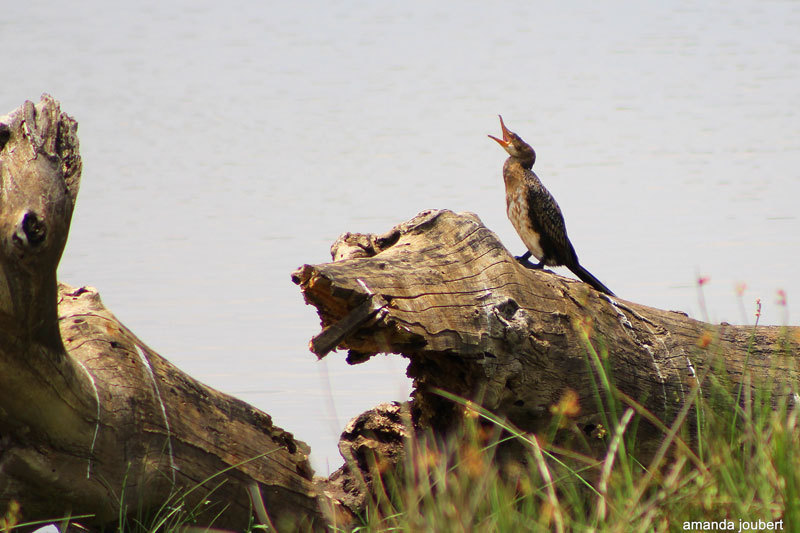 Posted at 17:56h in Birds by Nambiti Game Reserve

Although it’s now the winter season and some of our migratory species have flown to warmer climates, two very fascinating and beautiful waterscape ‘regulars’ can still be seen occupying sheltered bodies of water lined with trees and vegetation – the Reed Cormorant and the African Darter.

We were lucky enough to come across these two birds sharing a beautiful view on the same stick, just waiting for a tasty morsel to swim by.

Get to know the Reed Cormorant

With a height of 50-55cm and a wingspan of about 85cm, the Reed Cormorant is one of the smaller cormorant varieties. It is predominantly black in colour with a greenish gloss. It has a short head crest, a longish tail, and a yellow or red patch on its face with a yellow bill. Male and female Reed Cormorants are similar in appearance.

Although the Reed Cormorant is generally found alone or in small groups, it typically roosts in large numbers at night. It is a diurnal bird, most active in the early morning and late afternoon.

The Reed Cormorant feeds on a wide variety of fish. Although it can dive to considerable depths, it prefers to fish in the shallow waters close to the shore.

During the breeding season, nesting sites can be found in the forks of trees, on reedbeds, or tufts of vegetation or sand. Nests are made of a platform of twigs and other vegetation. The Reed Cormorant lays two to four eggs.

Get to know the African Darter

Also known as the snakebird, The African Darter earned the nickname ‘snakebird’ for the way in which it swims – with its body submerged and only the neck and head above water, the swimming African Darter gives the illusion of a snake swimming on the surface of the water.

With a length of 81-97cm and a wingspan of about 120cm, the male African Darter’s body is almost completely glossy black, but for white streaking on the face and body. Its neck has a warm chestnut hue. Like the juvenile birds, the female African Darter is browner in colour, with less noticeable white streaks. Although the male’s bill is slightly larger than the female’s, both use these strong, sharply-pointed bills to impale fish for food.

When hunting for fish, the African Darter is able to dive for extended periods. It swims with its entire body under the water, allowing it to stage a surprise ambush on its prey without creating the disturbance of diving down.

Even if you’re not a keen birder – yet! – learning about the birds at Nambiti is a fascinating part of the overall safari experience. When you next visit, ask your guide to point out the reserve’s abundant birdlife, and we’re pretty sure that you’ll soon be besotted with birds!