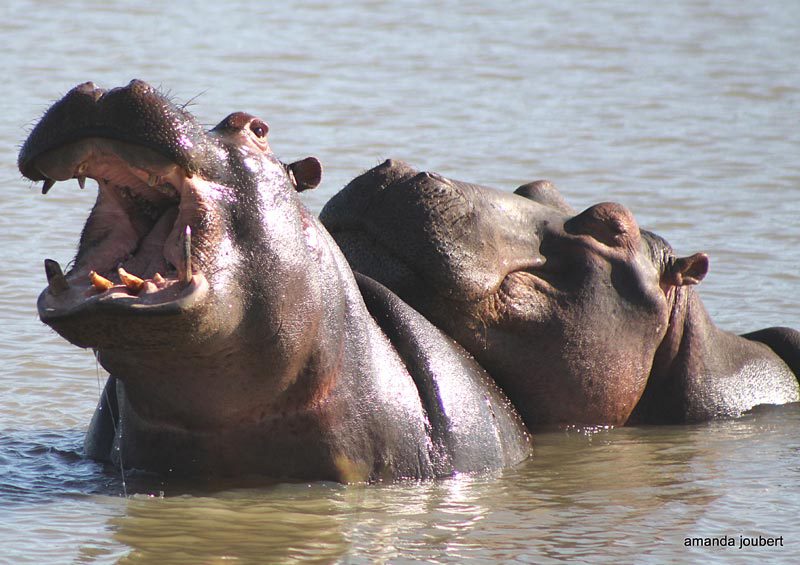 Have you seen a fat, frolicking river horse?

15 Feb Have you seen a fat, frolicking river horse?

Posted at 09:32h in Wildlife by Nambiti Game Reserve

At Nambiti, bodies of water have a life of their own. Our dams and rivers are home to water birds, small aquatic animals, fish and the “Big Boss” of the water, the hippopotamus.

The name ‘hippopotamus’ originates from Ancient Greek. The word means ‘river horse’. We can agree with the ‘river’ part, but when thinking of animals similar to the hippo, ‘equine’ doesn’t quite spring to mind! Perhaps the Afrikaans people came a little closer with the word ‘seekoei’, which translates to ‘sea cow’. Although some may agree that the hippo is more similar to a cow than a horse, the closest living relative of the hippo is, in fact, the whale.

As you can see in this photograph, hippos are able to peep out the water without exposing their whole head and bodies. Their bodies are designed in such a way that their sensory organs are situated on the top of their heads. This means that and they peer from the depths with only their ears, ears and noses sticking out of the water. You may be surprised to learn that even though hippos spend most of the day in the water, they are unable to swim or float. Rather, they stand or walk on surfaces below the water.

When underwater, hippos are able to hold their breath for up to seven minutes, although they usually come up to take a breath every three minutes or so. They are excellent sleepwalkers – even when they’re sleeping, they will instinctively rise to the surface every few minutes to breathe.  When underwater, they can also close their ears and nostrils and ears to prevent water from entering. This means that hippo calves can suckle on land or underwater.

You’ll notice that a hippo’s eyes and ears have a pinkish tinge to them. This is due to a red substance they secrete which acts as a sunblock and moisturiser to their sensitive skins. It’s only at night that hippos leave their watery domains to feed on plants. They can cover up to 10km while grazing and guzzle down up to 35kg of grub!

When you see a hippo open wide (and get a look at those long, curved canines!), this is not a lazy yawn, but a warning sign. Dominant males are very territorial and will bare their teeth and make loud grunts and aggressive splashes on the water. When you witness this kind of behaviour, you’ll understand why the hippo is considered to be one of the most dangerous animals in Africa.

If you’re lucky enough to be coming home from your afternoon drive at Nambiti at precisely the right time, you may see the hippos leaving the water for the evening to graze. Seeing them out the water is fascinating, and you can truly appreciate why they are the third largest land mammal after the elephant and white rhino. And when there’s a baby in sight, be prepared for a cuteness overload!

Visit us soon to see these Dukes and Dames of the Nambiti dams go about their daily business.