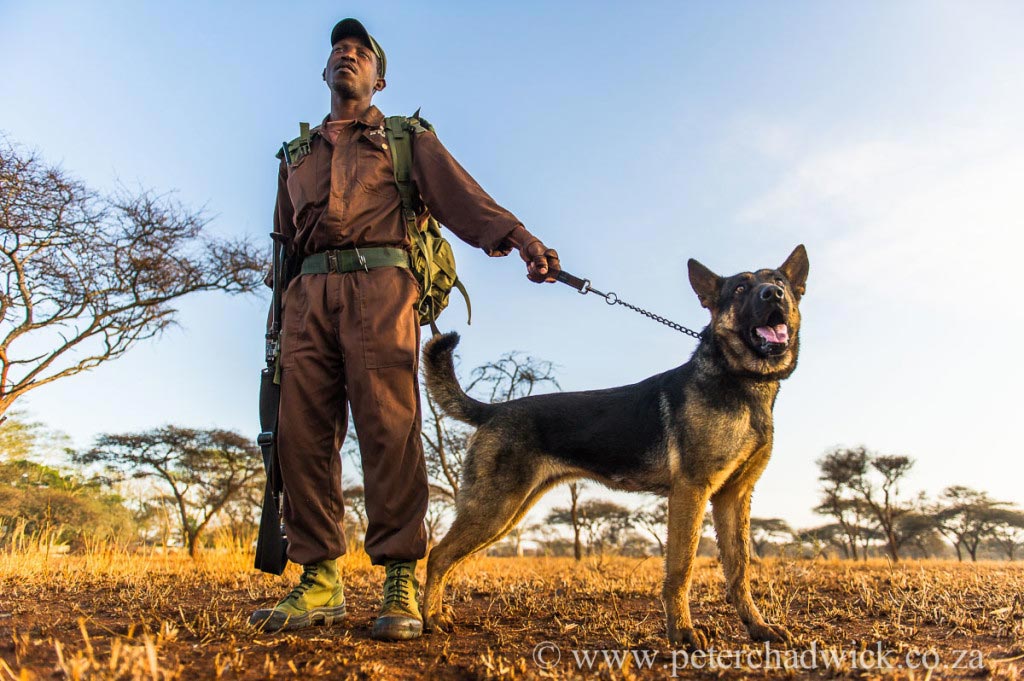 Africa’s Rangers at the Frontline of the Poaching War

This article is brought to you by the International League of Conservation Photographers (iLCP). Read our other articles on the National Geographic Voices blog featuring the work of our iLCP Fellow Photographers all around the world.

While the world’s media largely focuses on the rhino and elephant poaching that is taking place on the African continent, little attention is given to the field rangers who are the ones at the frontline of this war against Africa’s iconic wildlife.

The ranger’s job is often undertaken without recognition and with little understanding of the extent and complexity of the work that they do and the positive impact that these rangers make for conservation. The rangers have to work in remote wilderness areas under arduous conditions, usually where communication is a serious challenge and resource support is extremely scarce. They make enormous sacrifices, regularly placing their lives at risk in ensuring the integrity and conservation of Africa’s protected areas. The work of these conservation heroes is not only about undertaking law enforcement patrols, but they also assist in other important conservation tasks such as game capture, fighting fires and the monitoring of the wildlife that they spend so much time protecting. To be effective, they need to be well trained and properly equipped and require the traits of discipline, honesty, integrity, fitness and the ability to work as part of a team under difficult conditions.

In the current war against rhino and elephant poaching, the potential of running into well-armed poachers runs thick and mental preparation prior to heading out on a patrol is essential. After a thorough kit check, the rangers deliberately slow their breathing down to control and compensate for their increased heart rates. Once out in the field, they make sure that nothing is rushed and that their movements become well coordinated as they work as a team. They signal to one another by hand and regular stops are made in the bush to just observe and listen. Eyes are constantly searching for any abnormality and hearing is peeled to listen for any unnatural sounds or alarm calls. Sense of smell becomes highly aware of anything that gives away the presence of other humans and every one of the ranger’s footsteps is carefully placed so as not to make a sound and give away the presence of the ranger team on patrol.

As an ex-ranger, having spent many years in the field, I have been privileged to have worked with many ranger teams across Africa. I have selected, trained, mentored and labored alongside them and have proudly watched their careers develop. I have patrolled with them in the fight against poaching and have spent days and nights with them out in the field under tough and rugged conditions. Together, we have been frustrated by poaching gangs for months on end until all of our efforts finally paid off with the arrest of these groups that have been decimating our wildlife. These poachers have on occasion, shot at us and we have in turn had to shoot back. I have seen the consequences of these violent encounters on both the poachers and on the psychology of my staff. I have had to medically evacuate rangers when they have been injured and have had to restart their hearts in the confined space of small medevac helicopters. I have also had to watch the life fade from their eyes and then be the first to tell their beloved family members that their father/son/husband would no longer be returning home!

The effects of this armed conflict are not only grievous, but are also detrimental to rangers’ well-being. Rangers are now expected to go beyond their typical role as conservationists to become active players in guerrilla warfare, putting their lives in constant jeopardy. Rising incidents of post-traumatic stress disorder (PTSD), acute stress disorder and burnout fatigue are just some of the effects rangers have to endure as a result of this ongoing assault on our natural heritage.

They are waging a war that is relentless, unforgiving and uncompromising in nature and that is taking its toll physically and emotionally. All conservation efforts in Africa will amount to very little without a well skilled, resourced, dedicated and motivated field force. It is high time that we all rise up and recognize the crucial role that these heroes play and we must support them in every way possible!

The Game Rangers Association of Africa (GRAA) is committed to increasing the necessary support systems rangers so desperately need, and I have partnered with them in order to promote the following key messages.

Peter Chadwick is an internationally recognized award-winning photographer. He specializes in photographing and writing about conservation and environmental issues on the African continent.

Support the work of the International League of Conservation Photographers by donating at this link.