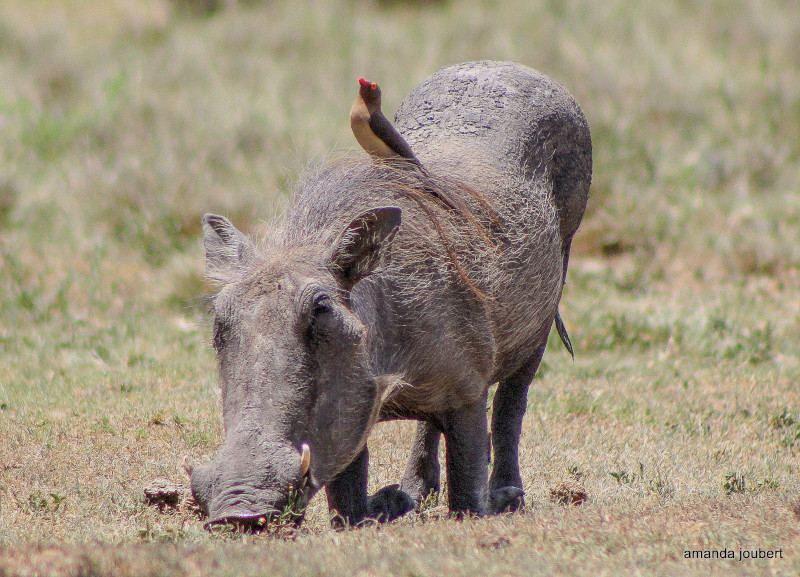 How the Warthog got his looks

Home > Blog  > How the Warthog got his looks

14 Oct How the Warthog got his looks

Posted at 13:19h in Blog, The Lion King by Nambiti Game Reserve

Guaranteed no matter where you travel on Nambiti, you will see Warthog. They are comical, spunky characters with mischief being their middle name.

The common warthog is a wild member of the pig family and is the only pig species that has adapted to grazing and surviving the savanna habitats.

Their food consists of grazing on short grass in the wet months, and digging up roots, bulbs and rhizomes in the dry months. But being omnivores they do occasionally indulge in a meaty snack in the form of insects or carrion.

As legend has it, Warthog was a handsome creature and knowing this, unfortunately, he became very vain. This was the cause of the other animals starting to actually dislike him.

One morning he left his burrow with his tail sticking up proudly as he toddled off in search of food. Along the way, he happened to pass Porcupine, who was on his way back home for some much-needed sleep. Porcupine, who still had a long way to go, decided to nip into Warthog’s burrow for a quick nap before Warthog returned home.

While this was happening, Warthog was grazing on the juicy green grass and having a good wallow in the mud by the waterhole.

Nearby under a tree lay Lion, who felt rather grumpy. Warthog just couldn’t resist showing off how handsome he was completely covered in mud, parading up and down. For Lion, this was just too much. He jumped up with a mighty roar, charging Warthog.

Getting such a fright, he turned tail and ran as fast as his little legs could carry him, straight into his burrow where Lion could not follow him. Not realising that Porcupine was in his burrow sleeping, Warthog rushed at him with a speed. Thinking he was being attacked and hearing the angry roar of Lion, Porcupine leapt up and spread his quills.

Crying out in pain, Warthog backed out of his burrow, his face and snout covered in quills. At this sight, Lion roared with laughter and all the animals came to see what happened.

“It serves you right for being so vain”, said Lion. All the animals laughed at him and did not help to pull the quills out. His face and snout swelled up so much, he was no longer handsome.

Warthog learnt a big lesson about vanity that day, and to this day he is still ugly and always enters his burrow backwards. Just in case.